“The Waldensian Seminary????” My father told me with a tone of mock horror in his voice. “Why would you want to go study with them???” While I knew he was joking, I responded “they had the opportunity wide open for me.” I remember this exchange very vividly even now — more than eight months after the fact.

It all started as part of the process of planning my second year of my attempt to get a degree in Biblical Languages from the Graduate Theological Union in Berkeley and I needed another course that was not related to biblical studies. At the time, it was looking like I would need to take something over the intersession, the period in January between the two semesters, so I was viewing the intersession offerings. Greek??, nahh — should have done that at Cal. I`ve got Hebrew covered…. Not much in terms of Biblical studies…… hmmm… lets see…. out of Bible… a ver. Literally on the last page, there was a course entitled “Rome, a Crossroad of Religions.” Hmmm…” I thought, “This looks interesting.” As I read on, I saw that the course would not only be taught from the perspective of the Protestant minority, but that it would be taught in Rome itself! The more I reflected on it, the more taking the course made sense. I then saw that it seemed to be specifically geared for students affiliated with Starr King School for the ministry, one of the member schools of the GTU. Since I am affiliated with the Franciscan School, I was not sure if it was open to me. I emailed Dr. Gabriella Lettini, the professor co-teaching the class, asking if it was open to the whole GTU. Not five minutes later, she responded that it was in fact open and that she would love to have me in it. I asked her to put my name on the list of people interested. I then sent the information over to my adviser, Fr. Mike Guinan, letting him know that I found an opportunity to do something on the world stage that would fit a requirement. After a couple of emails back and forth, he responded “I see.. Buon Viaggio.” Fr. Guinan is normally very understated, hence this was his way of saying “what are you waiting for? Get your passport and plane ticket and have a good trip!”

Hence, my long trip to Rome started. Personality-wise, I have always been the sojourner and the traveler. Since I was a child, I would always look overhead and see airplanes crossing the sky or ships entering or leaving the port of Oakland, wondering where they were either going to, or arriving from. Aside from a trip to Vancouver Canada, I never have had the opportunity to travel internationally. My brother Antonio has been “across the pond” many times. My father Randy has been to Mexico on several occasions, and my Mother has also been to Spain. None of my immediate family has been to Italy though.

Of course the question has come up, why am I maintaining my travel blog and forum on a Catholic website since I will be primarily with Protestants? The answer is simple: Unconventional Ecumenical Dialogue. Normally, somebody who is Roman Catholic would not even think about taking a course in Italy from anybody BUT Roman Catholic authorities. My notion is different. Namely that what we as Roman Catholics have in common with other Christians allows us to learn from each other to solve our common problems. While we do have some profound differences — most of which I feel are really quite minor in the grand scheme of things — we do have enough in common on other issues that we can borrow from each other`s traditions where it makes sense to do so. For example, when it comes to music, for the longest time Johann Sebastian Bach`s organ pieces could not be played in a Roman Catholic Church . The reason: he was Lutheran. Similar story with Martin Luther`s compositions “Away in a Manger” and “Stille Nacht” or “Silent Night”. All of the above now are generally considered fit for the Roman Catholic Church these days — in fact “Silent Night” is now a common communion song for Midnight Mass! This is a classic example of how something that started in another Christian tradition can come over to ours quite successfully. Therefore, the goal of this Ecumenical dialogue, that I have had the privilege to participate in, both in my parish work and in the Ecumenical heaven that is the GTU, is always better understanding and respect for the other.

The way this one is going to be unconventional is that I will be conducting it fifteen minutes walk away from the Vatican — where Der Panzerkardenal patrolled under Pope John Paul II and where he currently sits in the seat of saint Peter as Pope Benedict XVI. This is especially interesting in Italy, where politics and religion are very much intertwined. There`s no separating them, like we attempt to do here in the states. That being said, It will be interesting to see how it all comes out in the end.

I will continue to post on this blog as events leading up to my trip unfold. In addition, I will endeavor to post videos and pictures of my trip as I go. Most of my ecumenical dialogue will be interpersonal, as my main interest is the history and archeology of the place. I will also attempt to attend Mass in the Vatican as well as show the features of the City as they are revealed to me. It all should tie together nicely.

Please stay tuned for my next update when it comes.

We Are What We Eat → 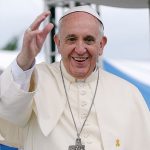